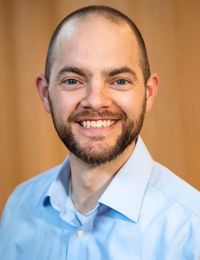 Charlie grew up not too far away in West Chester, PA but has definitely taken the scenic route to finally end up in Lancaster. His first big move was to the Philadelphia area where he graduated from Drexel University with a degree in biology in 2006 before attending physical therapy school at Arcadia University. After graduating with a Doctorate in Physical Therapy in 2009, he began his career working at a rehab hospital where he treated patients with multiple neurological issues such as stroke, spinal cord injury and traumatic brain injury. In addition to this, he spent time as the lead inpatient amputee rehab therapist.

In 2011, he married fellow Arcadia University PT school graduate and Ephrata native Amanda Funk. Together they embarked on a two year journey across the country working in under-served areas as traveling physical therapists. Their travels took them through the Midwest, Pacific Northwest and as far away as Alaska. It was in Alaska where Charlie was exposed to outpatient manual therapy. There was certainly a temptation to remain in Alaska, but Charlie and Amanda decided to return to PA in 2014.

While living in Bloomsburg, PA for two and a half years, Charlie managed an outpatient physical therapy office while honing his manual therapy skills and combining them with his neurological rehab background. In addition to this, Charlie and Amanda completely renovated their home over these two years and had their first child, Claire, in October of 2015. When the opportunity to work at Prana came about, Charlie jumped at the chance to serve with such a great team of manual therapists and move closer to family.

In 2017, Charlie and Amanda’s family expanded with the birth of their second daughter, Maia. The four O’Malleys currently enjoy living in Ephrata and exploring all that Lancaster County has to offer.

In case you didn’t guess from his desire to live in Alaska, Charlie loves the outdoors. More importantly he enjoys sharing adventures with his wife, children, and friends. This includes hiking, biking, fishing, running, kayaking, snowshoeing, and snowboarding. Charlie has visited 23 different National Parks and would love to visit all 63 someday. He is also SCUBA certified. So if you have any advice on great adventures, either local or far away, in the summer heat or winter chill, on land or in the water, Charlie is all ears!